Stories of Feminicide- A Project of Chicas Poderosas & Connectas 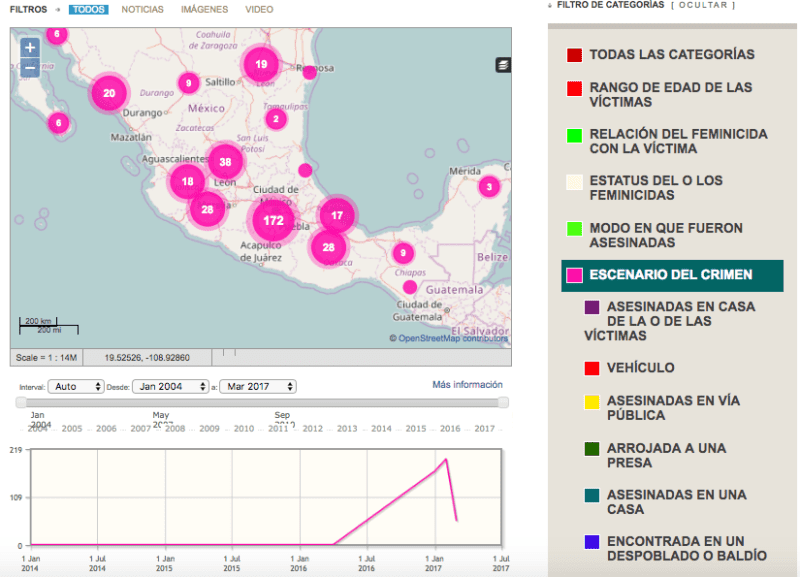 You always tend to blame the victims, what can we do to change this?

This and other more questions were discussed in our second virtual encounter between Connectas and Chicas Poderosas: “Stories of feminicide that count”. This time we were accompanied by Maria Salguero, Mexican geophysicist, Verónica Cruz, director of Las Libres in Mexico and Kennia Velásquez, who moderated the talk.

The phrase:
“You have to tell the stories of her life instead of telling the stories of her death. That involves a lot of work, it involves approaching the family, documenting. You can tell that, that woman, who got stabbed by her ex-husband, because she was going to leave him, she is missing to the parents, a children, a school where she was a teacher. I mean, tell me how you lived, “said Veronica Cruz, director of Las Libres.

A little more about the project of Maria Salguero:

She has dedicated his free time to the production of the map “The feminicides in Mexico”, created from red notes. Since 2016 she has been classifying the data of the notes consulted by: junior femicide, femicide of adolescents, adult women, elderly women, femicides where the age of the victim is not specified, trans femicide,  some attempts of femicides, femicides by connection, femicides by lesbophobia, migrants or foreigners.

The map also takes into account whether femicides have relation with their partners; Relatives in blood or not; Their mother’s partners; Known or if their identity is unknown; If there is no link between the victim and the femicide or if the link is unknown. And also, working to the smallest detail, includes a very important fact: if the femicide has already been consigned, linked to the process, sentenced, is at large, committed suicide, is dead or is unimpeachable, in the case of some minors.

“Broadly the map is structured during 2016. The map’s data for 2017 is better structured because I learned more concepts that helped me to modify and improve it. I included how they were murdered, the scene of the crime or where they were found, what kind of femicide was, whether active or passive”, Maria tells us.

The concepts of active and passive or direct and indirect femicides as well as femicides by connection are taken from the Latin American model protocol for the investigation of violent deaths by gender.

“I back up the source as it is, from past experiences where I needed to get to consult the original source and no longer existed the note. In the bottom part I include all the links of the sources”, she adds.

She is also working on a map of feminicides in Mexico City: CDMX Feminicides

Issues discussed during the virtual conference:

How do you work from data to make feminicide visible?

Maria Salguero – I started uploading the data in Crowdmap to reference the red notes. I do the opposite of what you do: The stories of red notes are those which I’m turning into data.

If you click on a case, you’ll find detailed  information of the person. Each note is a data. In fact, I even added notes from years before 2016, because sometimes, in 2016 I found notes where the case had already been sentenced.

Does this visibility help to make visible or contribute to banalization?

Veronica Espinosa – I have two ways of seeing it. One, is as a journalist and another in my role as a collaborator of Las Libres. One form is enriched by the other and has been a very interesting experience for both parties.
It has led me to have another vision of how to address violence against women and Las Libres has helped them to position the issue in another way and to document some of the cases from journalism, with another vision.

I would say that there have definitely been moments for the issue of femicidal violence in which it has been necessary to manage and expose the data to contribute in a spectrum to public and social discussion, in which before the word femicide did not exist and was not understood what it meant.

What we would rather have to understand is how we should not be stuck at a stage in that process. Once a social positioning of the problem has been reached, then we have to move on to other ways of approaching it.
With Las Libres, not so long ago, what was done was to count murdered women. So we started to handle the subject. They are like the official database in Guanajuato and in the center of the country, practically.

It served in a moment and what we have to think now is that we must take the next step: analyze all that database, interpret that map and explain that reality.

Maria Salguero – When I started to capture data suddenly one day I said: I will see how many we can find in the Federal District. What was my surprise to see that they were 90. In Colima, Zacateca is where the femicide has increased, nothing more than there are of passive type, as they say the Protocol of the UN, that are by violent death by drug trafficking and organized crime. But the authorities are going to say that this is not femicide.

Veronica Cruz – It is that in fact that is what is said, but in fact we do not know it. It is like everything we know and ignore the phenomenon of drug trafficking. There are many false positives and the problem here is how that is contributing to the criminalization of women. That is very dangerous and how it also influences to minimize the issue of femicidal violence.

Is there any concealment of figures by the authorities?

Veronica Cruz – Yes, totally. That happened in the case of Las Libres. The entire database, that the organization has until 2015, was practically built alone. A database based on information from relatives of the victims. Why? Because information was requested and the information was not given, that information was closed, the Office of the Attorney General, the instance that manages these databases, did not open it.

Then we tried to hold a dialogue with some instances of government, precisely to press and that could be known directly and cross information. As part of the contribution to a public policy of the State, an exercise was made with the Attorney General and we realized that we were building new knowledge. Cross the Las Libres’ database with the Office of the Attorney General’s, the information was collated and we realize that there are many coincidences. It was enriched and also needed a lot of data that came out in the media and then we could confirm.

Maria – Something about criminalization. I have found cases where they are murdered along with the couple. Nothing else goes for the couple, but as she was with him, they end up killing her, in cases of violent deaths.

What is the role of the media in this issue?
What can we do to avoid being involved in victimization?

Maria – The photos, there are media that publish the photos with the body destroyed, mutilated. I think it’s one of the first details to look at and titles. There was a title that struck me from the Polaca, from Ciudad Juárez. It’s a woman they killed and they still had the nerve to put it that way.

Veronica – What you say Maria is just the consequence of the lack of vision of the editors, the reporters themselves about what is revictimization. Femicidal violence is placed as a matter of red note instead of seeing it as a social problem. We have to take it to the sections of social problems. Then we are going to strip that tint of ‘killed’ ‘raped’ and we are going to say ‘is another victim of this social problem’.
Maria – Well, although many red notes are the most reported, I found that they put: another femicide in Veracruz. They are few, some of Guerrero are the ones who put the photos as I tell you, the worst thing you can see. For example, El Grafico erases their faces. The Central Newspaper of Puebla does not put photos of the victims. Many are already becoming aware.

Veronica – Yes, there are media that have begun to transform this and many times it is a struggle from the inside. When our comrade journalist in Veracruz was murdered, who had disappeared first and then found dead, a photo of her that was lying on the street was published very much. I sent an email to the editors stating that I totally disagreed and that I thought they had to remove that photo. They realized the error. And there are many reporters who try to be very careful. And the other part is also stripping the language. It is very important.

I still find these notes of “passionate crime”, “He was unfaithful and stabbed her.” Do you know what we do with that note’s focus? We are putting all the blame on her.

What do we have to do? What is our suggestion? For example, putting the focus of the note, not on how she died, but on who is the aggressor, focus on the alleged or the responsible.

And the other is, how to tell the stories of his life instead of telling the stories of his death? That involves a lot of work, it involves approaching the family, documenting. You can tell that this woman, who stabbed her ex-husband because she was going to leave, she is missing some parents, a children, a school where she was a teacher. So tell me how you lived.